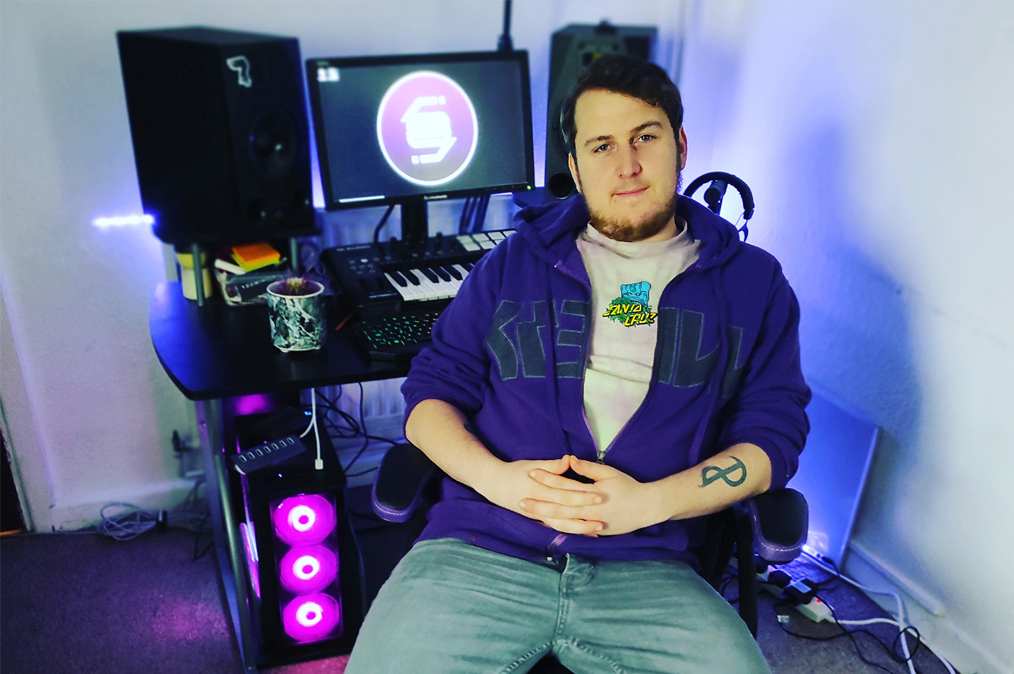 After recently becoming an Affiliate on Twitch, we chat with alumnus Rewan Leach AKA Pluvio about how he's diversifying as a creator and growing an audience on the live streaming platform.

Lockdowns and a lack of live music changed the lives of so many creatives around the world. For those that could, the world of live streaming provided an imperfect alternative to performing in front of a crowd. As the pandemic waged on, more and more creators explored live streaming with many turning to Twitch as a way of not only reconnecting with their communities, but also as a way of recouping lost earnings.

One recent adopter of Twitch is dBs graduate Rewan (Roo) Leach, who has been streaming music feedback sessions and music production tutorials.

After just a couple of months on the platform, Roo's channel has almost 100 followers and he is now an Affiliate on Twitch, which means he can now start earning money from subscriptions. We caught up with him to hear more about how he's developed his channel and get some insight for other creators looking to stream themselves.

"It wasn't actually Twitch that first got me into live streaming, it was a Facebook live stream" says Roo who joins us from his home in Cornwall. "I started out doing some music production streams, which was great on Facebook as so many of my friends would be notified and came to tune in.

"The moment Twitch really clicked for me was when me and the other two members of my label, Sinewave Collective, trialled a feedback stream to engage with our community a bit more.

"Seeing the response was really cool and it sparked an idea to try out music production streams through Twitch. Facebook had quickly become tricky because of various copyrights causing music to be blocked on stream, so myself and a lot of other creators and DJs made the transition."

Why live is better

In a world that was so desperately lacking meaningful connections, it's instantly clear why so many made the jump to live streaming.

"It's understanding that there is a potential to grow yourself as an artist. It's another avenue to promote yourself and build a fan base. Building meaningful connections with your community is such an important part of being an artist and things like Discord and Twitch, they galvanise that."

Music production tutorials are not new by any means and have long been a predominant presence on YouTube, attracting the majority of new producers looking to level up their skills. While it was an avenue Roo had already explored, it wasn't the platform for him.

"The thing is that with YouTube you're just throwing something up there for people to consume. Whereas with Twitch it's more engaging, it's more community focused. Because it's a stream you're given a bit of slack.

"I have a really relaxed approach to Twitch, I try not to take it too seriously and just have fun. Sometimes I say the most embarrassing stuff and have to roll with it, but it's real. I think that's what people like about watching live streams is that realness. It's seeing me for who I am and how I actually approach my music, rather than predetermining or orchestrating what I'm going to do."

Learning new techniques and breaking out of creative habits is one of the core reasons why audiences seek out music production tutorials. For Roo, keeping his stream fresh and interesting has meant that he's gotten just as much from the streams as his viewers.

"It prevents you from procrastinating. When you've got people watching you, you have to actually do some work - you can't fiddle around with the snare for the whole hour. As a knock-on, that encouraged me to get more creative and break out of my comfort zone. I didn't want to fall into the same routine, I wanted to keep doing something new.

"When you're streaming you're strengthening those different thought patterns. People aren't going to keep coming back to see you do the same thing over and over, which really forced me to break my habitual way of producing and always approach things differently. I've stumbled on so many cool techniques as result!"

Roo's key tips for starting your own Twitch channel

While Twitch is fairly simple to get started, there's a lot of depth to the platform to unpack. Rather than repeat information that's freely available we asked Roo to share his insights and advice based on his own experiences to give any budding streamers a head start.

"You might have guessed by now, but community is the most important thing when it comes to building a presence on Twitch. You can obviously use social media to promote what you're doing, but Discord is where you need to be putting in the work; it's huge. The people you engage and connect with on Discord are most likely the ones that will check out your streams because you've built that rapport with them.

"Ever since I started writing music back in 2008, I was actively networking. I was really excited  to start meeting people in the scene and share what I'd done, but also to support them as well. Because I've been doing that for over ten years now, when I started streaming on Twitch there were already all these people that knew me from my work under previous aliases or labels that I'd run who were ready to support me because I'd given my energy and time to support them too."

2.  Invest in your setup

"You can start streaming with very little in the way of equipment, but you need to make sure that what you do have is up to the task. You'll need a computer, this can be a laptop, but I'd recommend a desktop if you can - Windows or macOS will both do the job. Obviously, the more processing power you have, the more robust you can make your stream, but most modern computers should be able to handle streaming a DAW while you're operating it.

"As an addition to your computer you need some software that routes your audio, any screens or apps that you're using and the overlays that give your stream an identity. I'm using OBS Streamlabs, which works on both Windows and macOS, and has loads of widgets you can use to add notification graphics for new followers and subscribers, or one that makes your chat appear on the stream.

"Next you'll want a good webcam. You can use the camera in your computer, but they aren't always the best when it comes to resolution which can be detrimental to the overall look of your stream. If you can't shell out for a webcam, there are apps that allow you to use your mobile phone as a webcam over Wi-Fi, which I've used in the past and it works really well.

"Lastly, you need to invest in a good microphone. I'd recommend a condenser microphone and a pop shield so that your vocals are clear and crisp. Again, if you don't have the money you can invest in a pair of headphones that come with a microphone attachment, though I'd recommend researching these as they vary in audio quality."

"If you can really tap into something that other people aren't doing, then roll with it. Even if you're not getting that many viewers, it will catch on."

"Live streaming isn't like showing someone your music or uploading a track to SoundCloud. This is you engaging with people, so you need to give them a reason to want to talk to you. If you know how you can support someone and offer them a personalised and inclusive experience, they'll keep coming back."

"I hadn't actually realised how many followers I had until doing this interview, it's not something I've been focussing on all that much. I'm removed myself from that and disconnected from getting followers and I'm more engaged with the people that are coming to the streams, and measuring my success based on that.

"You could have 1,000 followers, but if only two people are actually coming to your stream that big number becomes irrelevant. Make sure you keep that in mind when you're starting up and don't judge yourself unfairly."

"A really important part of being a Twitch streamer is acknowledging your fellow streamers; you don't want it to be competitive. There's lots of things that you can do to support streamers within your community. There's a feature called raids which allow you to send all your viewers to another person's stream once yours is finished.

"You can also host someone's stream on your channel when you're not live, so if someone goes onto your channel they will see the other person's stream and can potentially discover someone new. This also prevents your channel from lying dormant if you're not regularly streaming at a given period.

Boombastic Sounds (pictured top) and Pelikann (pictured below). It was actually Pelikann's streams that inspired Roo to pursue his own Twitch channel.

"Even if I don't have time to actively watch someone's stream I will still jump in and say hello in the chat and leave my phone on with the volume down and chat when I can. It's one extra viewer for them and it just shows that you're supporting them.

"You'll find that you start to build really strong connections with other streamers through these methods and that can take off in different ways. I'm actually going to be joining Boombastic Sounds' stream on 25th November, 2021 as a guest. For the most part, everyone is keen to help each other grow and that's a two-way thing."

"Much like Patreon, you can structure your subscription tiers to offer people different things based on what they pay each month. Subscriptions are different to followers, as the latter doesn't equate to any revenue, so incentivising someone to part with their money is a key part in growing the channel.

"I've set my channel up so that subscribers get access to samples and project files after my streams, or if I'm doing a feedback stream they can jump the queue so that I review their track first. They can also submit two tunes instead of one. It's all pretty simple stuff, but it can make a real difference."

"I was kind of scatty when I first started; I was streaming as and when. I soon realised that you need to decide what times you can commit to every week, but also think about when your audience are going to be free. Personally, I've found evenings are the best time as most people are freer at that time of day.

"I'm still figuring it out, but I've found that having at least one regular stream a week and then playing around to see what works outside of that gives the channel structure, but also gives me the freedom to experiment and understand the needs of my audience."

9. Do it for the right reasons

"Finally, it's not about what you want to get from people, it's what you can share with another person and I think that's such an important ethos to have with music."

You can tune in to Roo's streams every Wednesday from 7:30pm (GMT) at https://www.twitch.tv/pluviouk