Third year electronic music production student Max Trivitt joins us to talk about his explorations into circuit bending, the power of nostalgia and eschewing the pursuit of perfect sound.

At this time of year, we at dBs Institute are treated to some of the most inspired and left-field projects our final year students can dream up. Developed for their 'Innovation in Sound' module, the finished products take the form of audio-visual installations, sound sculpture, multi-channel works, interactive and live performance, plus many more.

One of these live performances was Max Trivitt's 'Will it bend, or will it break'; an experimental noise/glitch performance utilising circuit bending and an old Gameboy Advance. After seeing Max's early experiments we sat down to learn more about this unique take on the module and why getting hands on always beats in the box.

Let's talk first about your background Max. You've been with dBs for a while now, right?

Max Trivitt: "Yeah, I was out of education for a couple of years and when I started making beats and DJing it ignited something in me and so I joined the FE centre in Bristol to study the DJ & Electronic Music Production course. At the time my head just wasn't in it, so I made the switch to the Access to HE course, which had people closer to my own age and then it clicked for me. I somehow got 101% attendance by the end of the year!"

You've come a long way from just making beats and DJing. How did you discover the more experimental side of music?

MT: "There wasn't a definitive moment, just lots of small ones really. In my first year, I attended an experimental composition workshop at dBs that was really inspiring and a big motivation for my approach to authentic sound design. I wanted to have my own source material to play with and to have an attachment with the material beyond just downloading and a sample online."

Do you not enjoy sampling in that sense then?

MT: "Synthesis was something that always interested me and there's a rebellious part of me that always wants to be the creator behind my sounds. I want to be original and I personally don't feel like using a sound that someone else has made.

"That being said, I think there's a place for samples. I use a lot of movie samples for vocals and use that to try and further portray the story of the song. Sampling from older movies is great because it brings perfect imperfections. Some of the artefacts would be things I never would have layered in myself, but fit the track perfectly."

I love that idea of perfect imperfections! Has that always been a creative ethos for you?

MT: "I used to be so obsessed with trying to make a perfect sound or trying to like recreate the sounds of music producers that I idolised, but would be disheartened by the fact that I wasn't making the same sounds, they weren't as clean, they weren't as big.

"I let that go in the second year of uni - it sounds how it sounds. I might have made a kick that sounds crappy, but when paired with a crappy snare, a crappy bassline; it works. I found a lot of freedom and relaxation with that mindset. Some of them don't go anywhere, but some turn into a beat like 'Misu', which became a track on my new album."

When did you start implementing experimentalism into a full composition?

MT: "There was a module with John Canning where we had to pick an object or a scenario, sample that thing and then make a track out of it and I chose my dog. She's a boisterous American Bulldog and she likes to make noise just as much as me, so that might have been my first actual step into making a full composition which is totally designed by me.

"I used samples of her barking, rubbing a contact mic on her fur, recording the sounds of her walking on laminate flooring."

Were you recording sounds with a specific idea in your head of how you would use them?

MT: "The way I approach it is not always listening to the sound and then trying to see what can come out of it. I'm not really actively listening for my next sound. I definitely notice things like a cool creaky door, and think of how it could be applied, but when I have those ideas, they just stay as ideas. I prefer to capture and create sounds when there's no idea or predisposed notion as to what they could be turned into."

How did this lead to you getting into circuit bending toy instruments?

MT: "I first tried circuit bending in my second year. I found a great YouTuber called Simon the Magpie. He's really outside of the box and has done a lot of circuit bending on guitar pedals and kids toys, which I found super inspiring. When the opportunity arose in second year to do this, my tutor encouraged me to just buy a soldering iron and it arose from there. 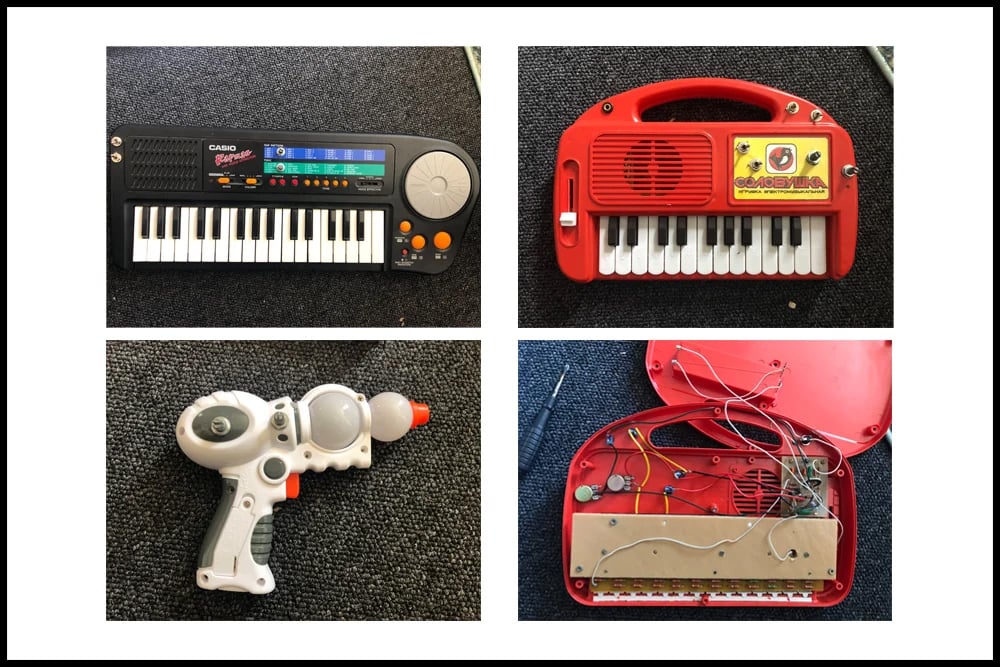 Some of Max's circuit bent DIY instruments including a Casio Rapman, ray gun and Soviet synthesiser

"A lot of what I've created this year was down to learning from Emmanuel, too. He's very good at pushing you out of your comfort zone, which I loved. I was already on the diving board, he just shook it [laughs]. I loved all the experimental stuff he introduced us to, and you can really tell how much he cares about each student's journey. It's about how you get there rather than the end product, that you took some risks and explored something new; it doesn't quite matter if the end product is good."

How did you land on the Gameboy Advance as the foundation for your innovation performance?

MT: "It was simple - my friend gave me his Gameboy Advance and said I could do what I wanted with it. I've grown up with Gameboys and being a huge Pokemon fan, the act of holding it is very nostalgic and brings me joy.

Max's live setup for his performance 'Will It Bend or Will it Break' at The Crypt at St. John on the Wall

"Several of my final projects are interlinked with this experiment, so not only is it about bridging the gap between circuit bending and live performance, which isn't done all that often, it's also a research project looking into how many sonic affordances the GBA offers and how that can be expanded with circuit bending; and also if music can be made using the sounds it generates.

How does it all work then?

MT: "It took lots and lots of research to make it work. Essentially, it's a combination of an integrated circuit chip, which splits the signal and separates it into three separate signals, an LED chaser which turns those signals on and off, and sequencer that allows me to trigger those sounds rather than having static tones.

"It's hooked up to the mixer that then links with Ableton where I can add loads of post processing to the sounds, which lets me tune it, and add FX like distortion, delay etc."

How does the Gameboy compare to some of the toys you've circuit bent?

MT: "In my experience with the toys that I've bent, there's one thing that it can do, maybe two and it does those things really well. With the Gameboy I've been able to do three different techniques all within the Gameboy by like modifying the clock, which will then modify the pitch and creating feedback loops which then create tones. Messing with the amount of power that goes from the battery to the circuit board makes it slowly power down and die. If you find that sweet spot in the middle where it's kind of dying, but still got that little bit of juice it makes a whiny noise, which is really appropriate for what you're doing.

"The sound that it makes is very unique. Nothing that I've bent or even synthesisers that I've used don't produce the same sound and that's what excites me."

This isn't the final form though is, it?

MT: "I wanted to hold it like you would a Gameboy, so the original controls affect the sound. I did replace the D-pad with an analog stick from a PS3 controller that connects to the clock, which in turn controls the pitch. That freedom of movement with the joystick made the pitch variations really fun.

"Theoretically, it sounds really good and quite simple, but then in practice there's a lot more to consider. My end goal is to make a handheld synthesiser that is nostalgic to the old 2000s gamer."