How to rescore video game trailers with Matthew Owen 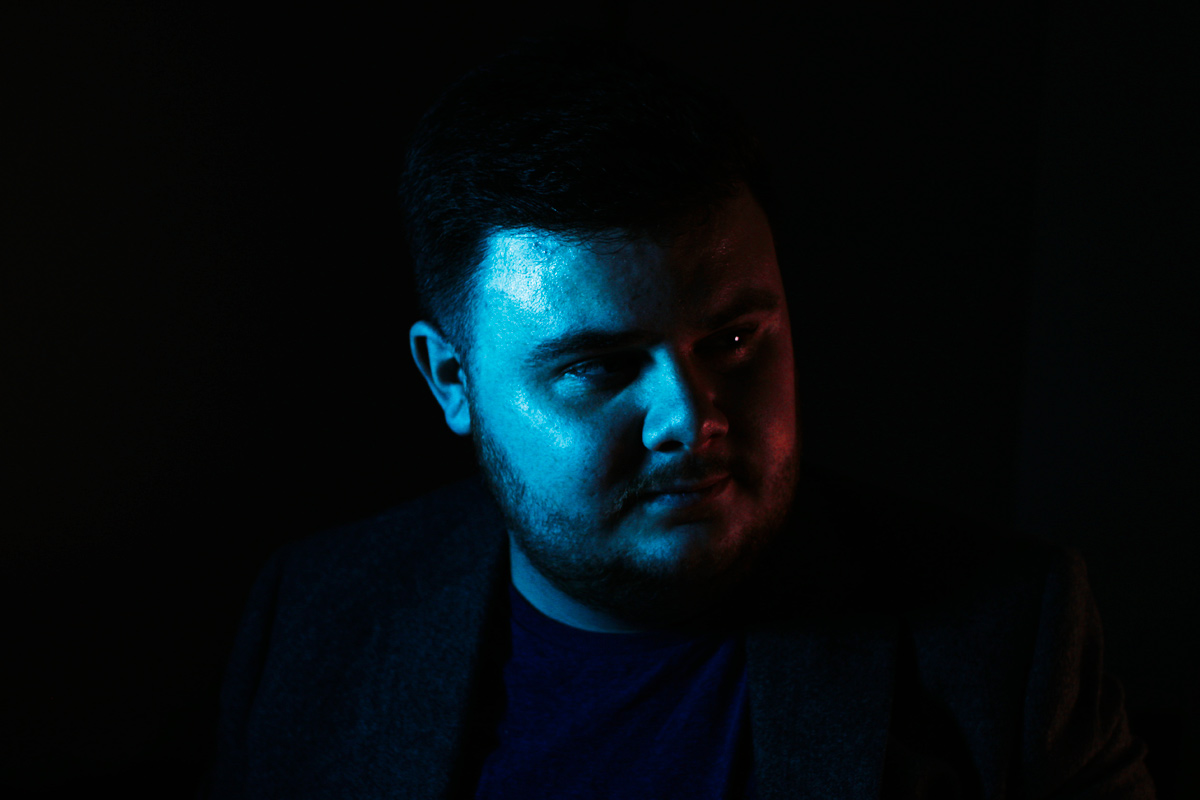 Though music has always been integral to the success and immersive quality of any given video game, interest in game soundtracks has seen a huge boom thanks to an increase in availability of game audio tools.

That's why we've teamed up with Matthew Owen, one of our second year students at dBs Music Bristol, to find out his top tips for rescoring game scenes and trailers. [Photo credit: Dan Fox]

Despite a lifelong passion for gaming and music, Matt wouldn't come to realise the two could be brought together until studying the Access to HE: Music Production course at dBs. Previously a DJ with 6 years experience, Matt spent his time on the course filling in the blanks on music theory and production techniques. When it came to creating a project for the sound for visual media module, Matt put his newfound skills to the test and ventured into rescoring some game trailers.

The final product was a high-quality showreel of 6 rescored trailers in a variety of different genres. It was a lightbulb moment for Matt and he threw himself into the world of game audio, creating not just the music but also the sound design for both trailers and gameplay scenes.

Now a student at our HE centre, Matt has been soaking up knowledge from his tutors and classmates and - in an effort to give something back - is fostering a new community through the Game Club.

"Myself and my tutor Jasz Pike were discussing how we wanted to elevate what people's expectations with video games are, as today it still has this slightly immature reputation, but the game industry is overtaking the music industry. Using the game club, I wanted to show people how far gaming has come along and how many applications it has outside of what people expect."

Matt's enthusiasm for the medium is undeniable and with game audio being one of the fastest growing industries right now, we asked him to take us through his process for rescoring video game trailers as a guide for any newcomers who are interested in venturing into this exciting area of the audio industry.

When working on a rescore for the first time, I would recommend choosing a trailer that gets you excited as you will be spending quite a bit of time doing this, so you need to be motivated by the gameplay.

When deciding which media I am going to rescore, I tend to try and go with the most recently released gameplay and trailers of soon to be released games. The advantage of this is it will increase the amount of online traffic as it will be trending and potentially means more viewers seeing your work. However, when you're just starting out, this isn't as big a priority, especially if you're still finding yourself creatively.

Once you find your rhythm, I would recommend trying to branch outside what you normally work with to develop your skills. Make a list of different game genres, pick some that are the polar opposite of what you've already done. It's a great exercise to really push yourself creatively.

To build musical elements for a trailer/gameplay you will need a digital audio workstation (DAW). I use multiple DAWs such as Ableton Live, Logic Pro and FL Studio, but there are plenty of other alternatives like Cubase or Waveform Free.

Most DAWs allow you to import video and overlay audio, which makes the whole rescoring process much smoother. I also use Audacity as it's a great, free way to manipulate audio quickly to make interesting sound design.

If you're using a DAW that can't support video then you will also need some movie maker software. I personally use Vegas Movie Studio and film directors I've worked with recommend DaVinci Resolve as it’s a free program.

Good monitors or headphones will also help with the mixing and mastering. The rest is up to you in what synths, instruments and audio you use.

3. Understanding the relationship between music and sound design

The next step is figuring out where the music and sound design will sit in the trailer. These elements are harmonious but also interchangeable, and certain elements of the trailer with only need one or the other. Our eyes and ears are very good at filling in the blanks, so don't feel like every frame needs to be packed with sound.

A good exercise for this is to identify the main target of each scene within the trailer as this is often the only object that requires sound, for example if the main character enters the frame amongst a crowd of people you could only overlay their footsteps to reflect that they are the focal point of what is being shown. Silence is just as important a tool as music and sound design and this approach will really help hone your ears into knowing when a sound is needed.

When producing the music you must first ask yourself what the trailer is trying to say to the audience. It's important to make sure your music fits the theme of the game/trailer. However, the juxtaposition of the music to visuals can really amplify the message. Though the visuals are tailored to it, the trailer for Dead Island 2 does a great job of subverting expectations with the music used.

As well as understanding the theme, I suggest watching the video you wish to rescore multiple times and identifying the pacing. You need to be aware of where the pace changes up or down so you can compose the music accordingly. Add in notes of tempo markers at specific points to highlight changes of pace or emotional themes shifting. Similarly, there will be what I refer to as 'energy levels' throughout; is there a high stakes battle, or some emotionally charged plot point, or the enemy/main boss revealed?

With music production in general, you want to build the excitement and release this energy at the right points. The best trailers will naturally fluctuate between build-up and release as having wall to wall excitement without pay off can be exhausting for the watcher.

If you're like me, and not particularly experienced with an instrument when you start out, find free samples to overlay into your rescoring projects. All DAWs will come with a selection of loops in different styles, which you can then pair to your chosen theme. As you continue working on projects you can experiment with using the DAWs in-built sequencer and start writing your own melodies, too.

Once you have mixed, mastered and bounced your music, make a new project within your DAW which is just for sound design. I normally add the bounced music file in but leave it on a muted track so I can quickly refer back to and see how the sound design and music are marrying up.

Sound design is an amazingly creative process so it really is up to you how you approach this, although there are some resources at the end of this article to help guide you.

Next, ask yourself what the purpose of the object is that you're creating sound for. is it a box that a character brushes up against? if so then don’t overcomplicate it. Is it a super weapon firing? Make this as interesting as you can. Although this isn’t a set rule, it can help you with the first steps of sound design.

Unlike the score, sound design really has no barrier to entry. You can follow the same route as the music and use pre-made samples for different sound design elements, then layer them over each other to create a new sound, like a gunshot. Once you're comfortable with that, you can explore editing using effects like reverb, pitch bend, EQ, volume, crush, amplify and speed.

The most important thing is to be adventurous. Start recording random sounds around you, such as a door closing, fridge hum, anything! You don’t need expensive recording equipment, often microphones on mobile phones are perfect for the job. Then start to apply effects to completely manipulate these sounds and create your own bank of samples.

After this, the final step is to start exploring sound design using hardware and software options. Synthesisers are a great source of sound design inspiration and offer a nearly limitless level of sounds. You can be a little more left-field and using a violin bow on guitar strings to create some spooky ambiences, too.

Once you're happy with all the elements of your rescoring project, it's time to export the finished article. Most DAWs that have video capabilities will also have the option to bounce audio to video. Should that option not be available, you can bounce the final audio out and then import into whichever video software you have and then export the finished video from there.

Mixing is an important part of rescoring, by decreasing/increasing volume and panning left and right, you can marry up the sound to a position in space, for example a lower volume = further away, higher volume = closer, and panning is used for direction. Try to notice where the object is on screen and use automation to move the sound accordingly to the object. Does the car move from left to right? Then the sound must do the same.

Mixing between the music composition and the sound design/Foley should follow the same rules as stated before, what is the focal point? Generally, music will tell us how and when to feel certain emotions and sound design will add immersion into what is being shown, so you have to ask yourself, is the emotional energy that the music is carrying more important than the sound design that makes the world feel real?

As a rule in sound design you can make any sound you want if the profile is similar. A gunshot has the same audio profile as a balloon pop or book being slammed on a desk, so recording these sounds and applying effects can give you the same boom that guns produce, which is handy when you can't record an object directly.

If you are using samples from libraries, it is often like being a chef: it involves a lot of chopping and cooking (editing) to make the final product and often the best ingredients (best quality samples) produce the best end product.

And finally, when you're feeling more confident in your rescoring skills and starting a new project I would go so far as to recommend choosing a trailer and watching it without sound, then creating your score and sound design based on what you think the visuals are trying to convey.

Are you interested in the creation of video games too? Check out our guide to the best free tools for building your own game.