The Best Free Tools for Building Your Own Video Game

We take a look at the best free tools for building your own video game, from the engines that build the world to the software that populates it with sound.

It may not be widely known, but every key piece of software you need to build a fully-functioning video game is completely free. What's more, these tools are what the entire industry is using, from the humblest indie to the biggest AAA studio.

With the video game industry growing at an incredible rate there's never been a better time to get involved. The emergence of augmented reality (AR), virtual reality (VR) and mixed reality (MR) over the last few years has heralded a new dawn for immersive sound, and with AAA titles' budgets akin to that of Hollywood blockbusters, the level of detail that goes into a new game requires a greater pool of talent.

As a result, the amount of jobs has grown exponentially, particularly in audio-related positions, making it an excellent career to pursue. And for many who cleared their bank accounts to pay for a bedroom studio setup, as long as you have a half-decent computer you can download and run all the tools you need for game development without spending a penny.

Before we get to the good stuff, we should state these tools are only free as long you're not making substantial amounts of money whilst using them. Were you to develop a game using the tools below and it started to make considerable amounts of money, you'd then have to pay for a license to reflect its commercial success. We'll go over this in more detail later.

So without further ado, let's check out the tools!

The most fundamental tool in game development is the game engine, which provides a suite of development tools for building a video game, including but not limited to rendering 2D and 3D graphics, animation, scripting, AI, sound and much more.

Whilst some studios prefer to build their own engine from the ground up, many will favour using an existing cross-platform engine such as Unity or Unreal Engine. There are other game engines available, but Unity and Unreal are the most widely used so we'll be focussing on them.

Both engines are available to download for free, but Unreal requires 5% of your earnings, which isn't an issue if you're just starting out as a hobbyist. Unity is pretty much the same, and you won't have to worry about paying anything unless your game makes over $100,000 in revenue or your budget for developing the game exceeds $100K.

There are paid plans available for hobbyists that offer support to speed up the learning process, but whether or not you choose to use them is entirely up to you.

Unity supports all of the above too, but also supports smart TV platforms like Android TV and Samsung SmartTV, as well as augmented reality platforms like Apple ARKit and Google ARCore. Additionally, Unity is usually first to support a new platform so if you would like to port your game on various platforms, it's probably the best engine for you. 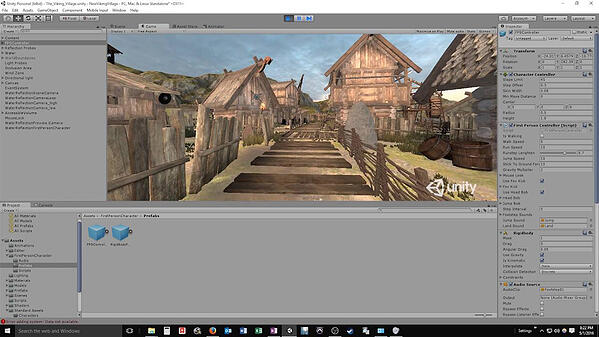 Inside the Unity game engine

The key differences between Unity and Unreal are the built-in tools. Unreal is more feature-rich including a cinematic editor, whereas Unity's store has a series third party extensions that expand the suite of tools you can use.

It should be noted that Unreal is more powerful than Unity, owing largely to the fact it uses C++ as its programming language, compared to Unity's C#, which for beginners is the simpler and easier language to learn.

Unreal does however provide Blueprint to combat the trickiness of C++, a handy scripting tool which allows you to connect nodes together to program gameplay elements, an invaluable tool for those not savvy with programming. 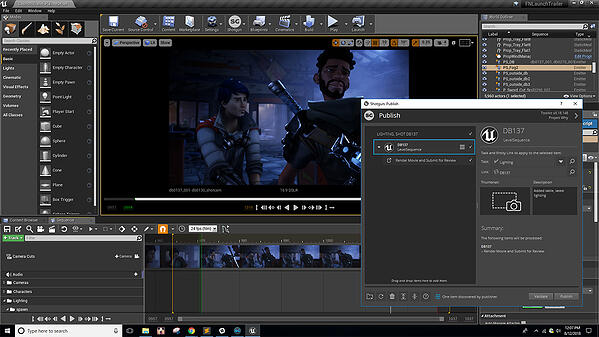 A look at the interface for Unreal Engine

Which one should I choose?

There's no real way to separate the two as it's a matter of preference. There are active communities surrounding both engines with plenty of tutorials and forums to help you find your way so if you're stuck for choice try out both and see which one works best for you. 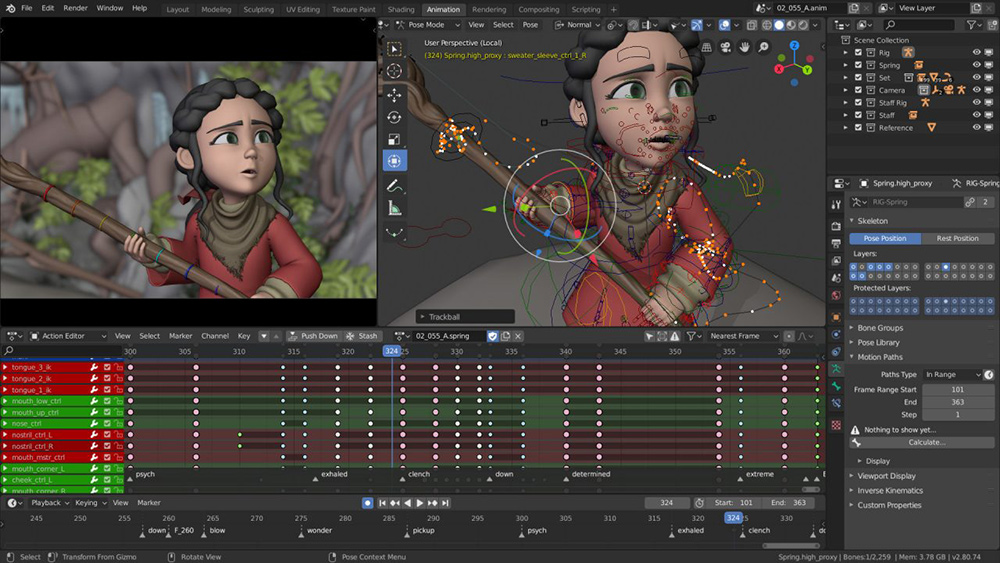 When it comes to designing the visual assets for your game, such as the characters and surrounding world,  our number one recommendation is Blender 3D. It's a completely free and open-source tool, supporting everything in the 3D pipeline; from modelling, rigging, animation, simulation, rendering, compositing, motion tracking, video editing and even game creation. It's cross-platform too, so you can use it on Windows, macOS or Linux.

Much like Unity and Unreal Engine, it can seem pretty overwhelming and difficult to create the most basic of assets, but there's an abundance of supporting tutorials with step-by-step instructions to help you become more familiar with the tool set.

If you have an interested in animation, we recommend you check out Blender Studio; which is an animated arm of the company that has produced some incredibly impressive work.

You may have encountered this term before, but for those who haven't, audio middleware is software that sits between the Digital Audio Workstation (Logic Pro X, Pro Tools, Ableton Live) and the game development engine (Unity, Unreal).

The purpose of middleware is to allow the designer, who may not have a programming background, to have more control over how, when and where their sounds are triggered in a game. Using this software means you can design and prototype complex audio behaviour without the need for a programmer.

To make things a little clearer this is the general journey your audio takes from recording to implementation in the game:

What's crazy is that before this software was available, audio would be given to the programmer who would then have to create the code to trigger each piece of audio. If there were any issues, the audio would have to be adjusted and the code completely rewritten. As a result of this back and forth and the time and cost implications audio middleware was born.

So let's take a look at the three most commonly used examples.

We'll start with Wwise quite simply because it's the industry standard for game audio. Originally a Windows-only program, Wwise exists as a separate piece of software that can be integrated with Unity or Unreal, allowing you to see your audio working in-game. The interface can seem a little clunky and old fashioned, but don't be put off! There's a whole host of reasons why Wwise is the industry standard.

One of its many strengths lies in its modular design, which allows you to create and experiment with different audio behaviours with a simple drag and drop method allowing you to add and remove on the fly. 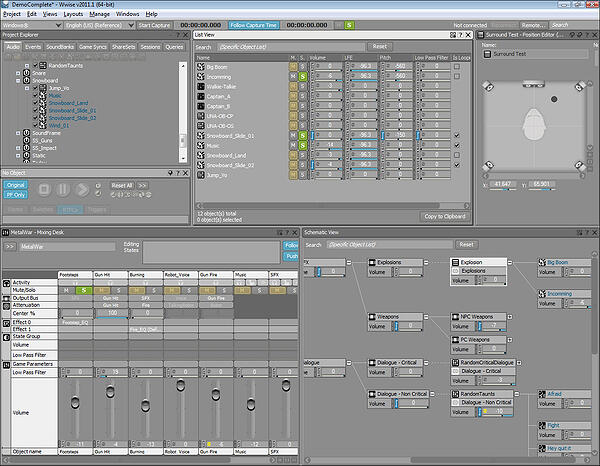 Those complex audio behaviours are much easier to create within Wwise thanks to 'containers'. Containers in Wwise are home to groups of audio objects and/or other containers that can be programmed to respond in a number of different ways.

The 'Random Container' for example will randomise the playback of any audio objects/containers within in it. This can even be applied to a single sample such as a gun shot noise and means that the player avoids suffering repetition fatigue from hearing the same sample over and over.

Additionally, there are three other container presets in Wwise that all perform different functions, but you can also create your own containers to perform increasingly specific tasks.

Whilst it is free for hobbyists starting out, Wwise requires you to purchase a license once your game is released or if your budget exceeds $150K during development (more info on the pricing plan here). With that free license you get full platform access with up to 500 sounds. Support is not included in the plan, but Audiokinetic has created an extensive guide to learning Wwise here and there's also the Wwise Project Adventure, which is a fantastic guide to creating interactive audio.

There's also the Wwise 101 to consider, which is a free online course designed to get you certified as a Wwise user. It's an excellent boon to your CV and a fantastic way to learn what Wwise has to offer.

Sporting a much less intimidating UI, especially if you have a background using DAWs, FMOD is our second example of audio middleware. Similar to Wwise, FMOD is a separate piece of software that can be integrated into Unity or Unreal allowing you to demo your audio in the game engine. 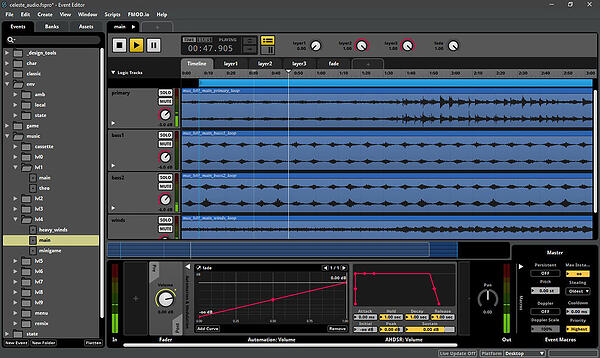 Another similarity FMOD shares with Wwise is containers, however they're labelled as 'instruments' in FMOD. Like Wwise there are a series of existing instruments designed for a variety of specific functions and again, you're able to create your own instruments with your own set of parameters.

We should say that unlike Wwise, which is more tailored towards larger budget games, FMOD is better suited to indie game development. If you take a look at their pricing plan, you can develop and release  a game without purchasing a license as long as development costs remain under $500K, unlike Wwise which applies a $750 license fee when you release your game. This applies to one game every 12 months with an additional fee of $2,000 incurred for each game released in that same 12 month period.

Lastly, we're looking at Fabric. Unlike Wwise and FMOD, Fabric is an add-on for Unity that bumps up the audio functionality of the engine and allows for the creation of complex audio behaviours within the game engine environment. Those behaviours could be anything from an ambient room tone, footsteps or the sound of a gun firing, depending on the type of game you're creating. 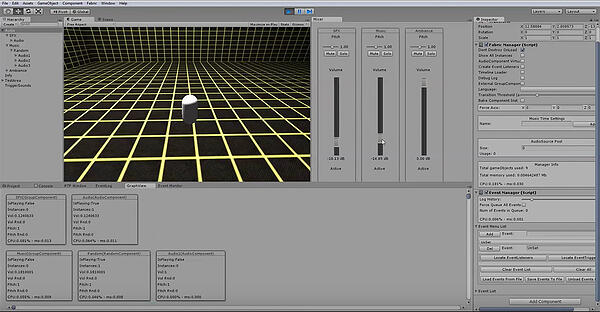 Whilst Fabric may not have all the features that Wwise and, to an extent, FMOD does, it is a nice entry-level suite to use, one that's bolstered by not having to switch between your game engine and audio software.

Which one should I choose?

If you're really serious about pursuing this we would suggest that you get to grips with both Wwise and FMOD. Whilst Fabric is still a very capable add-on, Wwise and FMOD are what most game studios will be using so it's invaluable to be familiar with both if you're hoping to find work as an audio specialist.

You can even go one step further and learn the code that goes into audio integration. A big factor behind doing this is that in recent years a new role in the form of 'game audio implementer' has become very prevalent in the industry as studios look to streamline the way audio is created and implemented into their game.

While the tools above will give you a firm foundation in your journey in game audio, it's common for audio professionals to also use a digital audio workstation (DAW) to prepare their audio before adding it to middleware applications. Fortunately, there are lots of free options within the realm of more traditional music and audio production which you can check out here.

What are you waiting for?

So there you have it. That fleeting thought about getting into the game industry could very possibly become a reality. What's more, it's currently one of the fastest growing creative sectors, with many audio-centric roles crying out for experienced people, so finding paid work is far less competitive than other areas of the audio industry.

Free Software Friday is our regular Friday feature here at the dBs blog. We dig the depths of the music production and media ...
Start Reading
dBs Sound & Music Institute Dec 10, 2020 8:00:00 AM 1 min read

Free Software Friday is our regular Friday feature here at the dBs blog. We dig the depths of the music production and media ...
Start Reading
dBs Sound & Music Institute Nov 5, 2020 8:00:00 AM 1 min read

Free Software Friday is our regular Friday feature here at the dBs Institute blog. We dig the depths of the music production ...
Start Reading