A dBs student is building a plugin to decolonise music production

‘Innovation in sound’ can mean many things. For some students who pursue this postgraduate pathway with us, it means developing ideas at the intersection of audio and other academic disciplines. For others, it means finding applications for emerging technologies within the sonic realm. For Regina Balachanthiran however, innovation in sound meant scrutinising the status quo in the current music production landscape and proposing a better way...

Music production software is often praised for increasing the accessibility of music creation. Compared to the late 20th century, when expensive studios and countless hours spent getting the perfect recording were an artist’s only option, nowadays all you need is a modern computer to start crafting your own unique sound. However, the benefits of modern music technology are not experienced by everyone equally, as postgraduate student Regina Balachanthiran knows all too well.

Raised by Sri Lankan parents in France and later the UK, Regina grew up with a type of Indian classical music called Carnatic music. However, when she joined dBs to start learning music production in advance of her game audio degree, she soon realised that her ethnic music culture was not easily accommodated by standard music production tools. 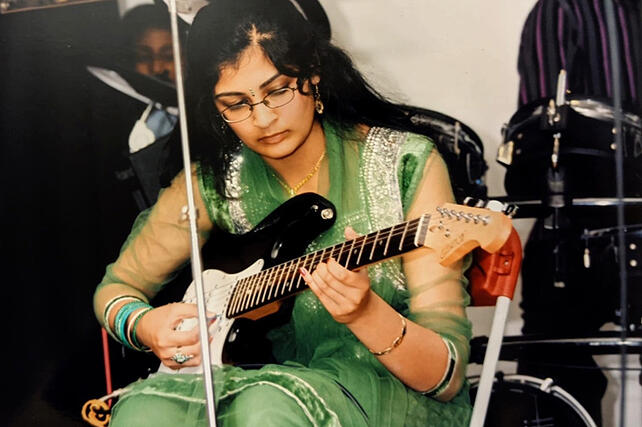 Regina grew up learning both Indian and Western classical music


“When I was writing a composition, I’d find it really hard to get what’s in my head onto the software. I naturally wanted to incorporate those features of Indian music into my compositions, but a key problem was bringing out a unique and defined character of the ragas within Carnatic music. It’s something other people might not be able to discern so easily, but since I grew up with it I could really hear the difference.”

Regina’s frustration comes down to a cultural bias in music production technology, which is predominantly tuned according to equal temperament, the dominant tuning system used in Western music.

“So we can say that a tuning system is like the alphabetical system of a specific language. Before you learn a language you need to understand the alphabet, how many letters a specific language has and what sounds those letters make. Similarly, when it comes to tuning systems it's about how many divisions of pitches a music system has and how they are spaced within that scale.“

Equal temperament divides the octave into 12 semitones of equal size on a logarithmic scale, unlike many tuning systems used outside Europe, which incorporate unequal divisions and intervals smaller than a semitone called microtones.

“I think it is important to understand not just what a tuning system is but also why it is that way,” Regina says. “The choice of tuning systems used within a culture is also dependent on what musical characteristics that culture prioritises. So when it comes to Western music, the priorities are polyphonic compositions, counterpoint and harmony. It places a lot of importance on multiple voices so it’s important that notes sound pleasing to the ear when played simultaneously. Equal temperament is best suited for that.” 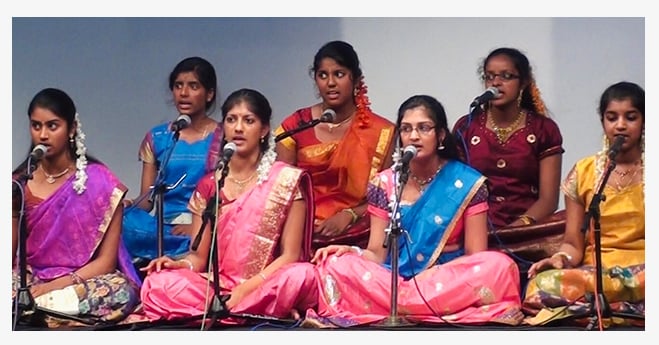 The main emphasis in Carnatic music is on the voice; most compositions are written to be sung, and even when played on instruments, they are meant to be performed in a singing style

“By comparison, 22 shruti (the tuning system used in Carnatic music) is best suited for Carnatic music because it prioritises complex melodies and pure tone intervals following the natural laws of physics since music is considered a form of divine art. It is difficult to have perfectly working pure tone intervals and complex harmony within one system. This is why you don’t see any orchestras or string groups in traditional Indian classical music. Performances consist of a soloist, percussionist and an accompanying drone because the music is not designed around polyphonic phrases or harmony.”

“Carnatic music is characterised by gamakas, which are like oscillations or embellishments between notes. It is based on vocal movements, and these microtonal embellishments or oscillations are possible with the voice; it brings out the unique characteristics and colour of Indian ragas, which are like scales. When Carnatic music is adjusted to equal temperament however, the slight offsets in pitch takes some of the natural beautifying elements of that raga away. So the full picture of that raga is not there.”

The colonisation of music traditions

Regina explains to me the process by which Indian music has come to be subjugated to the norms of the western sonic tradition. “There are many examples of cultures being colonised through European influence, which naturally leads to cultural changes through literature, music and art. In India, we saw through the British rule the introduction of an instrument called the Harmonium, which is similar to the organ and is based on equal temperament. They wanted to introduce it so that it could be used in Christian churches over there, and this resulted in all Indian classical music theory being modified to fit with it. Today it’s one of the most popularly learnt instruments in India.

“When I did more research into this, I felt really frustrated because I felt like part of my musical culture was gone. Recently there has been a resurgence in the 22 shruti system, and musicians like myself, who were completely unaware it existed, are re-discovering it and re-exploring it. So I thought, I should help this movement by making it more accessible in music production software on the electronic side. So that’s what led me to the research path I’m on at the moment.”

Regina’s masters research centres around the development of a new piece of audio plugin software that bridges Western and Indian tuning systems. “My software currently works as a Max for Live Device and it works with some of the built-in Ableton instruments and Serum. It converts incoming 12-TET MIDI input into 22 Shruti based ragas that you can select from a comprehensive menu.”

“One thing that’s important to understand is that, compared to equal temperament, where C is fixed, ‘sa’, the equivalent of C in Carnatic music, is moveable. Indian classical music is based on relative pitch to ‘sa’ and it can be set at any frequency, the rest of the notes will be based on where ‘sa’ is. This exists so that you can adjust your ‘sa’ based on your vocal range. Also since the main element of Carnatic music is gamakas, the colour of a raga is expressed through these embellishments. I find that there is no easy way to glide or oscillate between notes and then come back to a raga’s correctly tuned resting note. I have to end a phrase with a note that sounds slightly off and it’s frustrating because I can really hear the difference. I’m not saying this is unsolvable but there is no simple way to do it.”

Regina demonstrating how her plugin works

“One of the main issues with using the 22 Shruti tuning is that it is not equally spaced so the pitch of each note has to be adjusted individually. This is difficult through MIDI because MIDI doesn’t understand that and this prevents polyphonic pitch correction. So for example, if I’m playing a chord and I want to alter the pitch of one note up 12 cents whilst tuning the other down 5 cents then I have to assign each note to an individual channel which is an insane work around. I'm currently working on and implementing MPE support to circumvent that issue.”

“My plugin is designed in a specific way so that the black notes on a keyboard are not needed. All the correctly tuned notes of a selected raga will be routed to the white notes with C as Sa. There is also a relative pitch functionality so the root note of the scale can be adjusted to any frequency value.”

Facilitating interchange between musical cultures is one of the key motivations behind Regina’s research. “My hope is that Western producers can learn about how the Indian tuning system works, and I think by bringing that into music production software there's an area that can be explored and incorporated into the standard musical systems. It would be a waste to not explore such an interesting area and I'm excited to see what can come of it and what the creative community can do with it. Personally, I also believe that what tuning system a musician wants to use to make his/her track should be their choice and these systems need to be made accessible to all musicians for that reason."

Looking to the future

Although only in the prototype stage at the moment, Regina has lots of ideas for how she would like to develop her device in the future. “I'd love to see electronic software-based instruments being used in traditional Carnatic concerts. So performance mode is one thing that I'm looking into. I’ve been bouncing ideas off Reilly Smethurst who’s an expert in custom-built instruments. Through our interactions, I've developed a few ideas on a supporting MIDI device for the software. It would be nice to have an instrument that's not Western biased, that works with the software that I'm designing so that it's also incorporating performance in there as well.

“I’d also like to develop some form of visual representation of how the tuning system works, to include as a package with my VST. I feel like this would be helpful to musicians to understand how it works, and also use it as an educational tool, all in one."

Regina is currently completing her MA in Innovation in Sound at our Bristol centre. Find out more about other research projects being developed by our postgraduate students or request more information about this pathway.

Do I need a degree to become a music producer?

Interested in music production but not sure if formal education is the right way to go? To help you make an informed decision, ...
Start Reading
Billie Croucher Aug 13, 2020 12:00:00 AM 5 min read

10 tips for field recording during lockdown

As lockdown continues to change the way we live our lives, we asked dBs alumni, Natalia Mamcarczyk for some advice on capturing ...
Start Reading