Breaking The Bias: Women at dBs Who Are Killing It

The music, sound and tech industries have a long-standing and woeful gender representation issue. Although there are tentative signs that change is blossoming, the issue remains live. For International Women's Day & Women’s History Month, we wanted to highlight just some of the women at dBs who #BreakTheBias and are killing it right now… 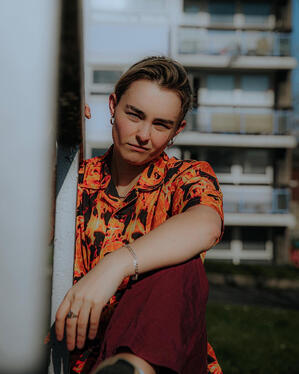 With UK tours and a Juno Download Number One already under her belt, Anaïs - who is in the second year of her FdA Sound & Music Technology degree  - is an accomplished DJ with a defined brand that she has cultivated behind the decks as a resident DJ and online. Now, she’s been picked up by the world-famous independent drum & bass record label Hospital Records and is going international…

What Anaïs Says: “I've just become Hospital's Women In Drum & Bass Production Mentorship Mentoree and that's sick. I had no idea I'd get it. When I got the email I was like “No way!” But honestly, getting that helped me because I went down to a workshop for women and I spoke to the boss and I think that left a really good impression. Through getting that Hospital mentorship, I've had loads of support and they've put me on all of their biggest shows as well, which is kind of scary. It’s also really cool… I get to go and be tutored by their biggest artists. So like Flava D or Whiney or Unglued. I could choose any one of them. I haven't done one yet because uni is pretty busy, but I will after May. I get A&R every single month. That's them listening to all of my tunes, and telling me what they'd change. Sometimes they might be like, “Oh, I really like that. Can we sign it?” That hasn't happened yet, but hopefully, it will… Now I feel like I have to maintain; I have to be at the top of my game constantly, which is a really good thing. But there's no room for trial and error now. I have to be on the top of my game all the time.” 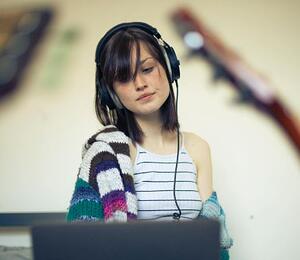 Olivia is a third-year on the Electronic Music Production degree who is approaching her dissertation, finalising an EP with accompanying narrative music videos and working on a project for the innovation in sound module that explores the subject of intimacy post-lockdown. Olivia’s dissertation examines the under-studied convergence between music and chronic pain…

What Olivia Says: “For my dissertation, I'm looking into how music can help chronic pain…I know that people use music therapy to help mental illness and for other reasons, but I didn't know if that would actually work for chronic pain… If you're not feeling well mentally, then your body is going to react to that in a physical way as well and then it becomes a bit of a cycle. So it seemed like it would make sense and from what I've seen, there is bits of research, but not anything really solid. It's a really nice gap to try and look further into…The most interesting thing that I've learned is just about the way that it's being treated at the moment. People are relying on painkillers; it's just a really short term solution. People who struggle with chronic pain experience this for years and they're just relying on pharmaceutical drugs. GPs are becoming more open to alternative treatments because it's such a subjective illness. Each person experiences chronic pain differently. It's really hard to measure… What I want my research to find out is whether there is a fundamental genre or sound that could work for everybody, because it's such a subjective illness and you can react differently to different types of music, or if there was just one overall genre that could work for everybody…If there are alternative methods, we should definitely be using them and implementing them into what is prescribed to people as treatment.” 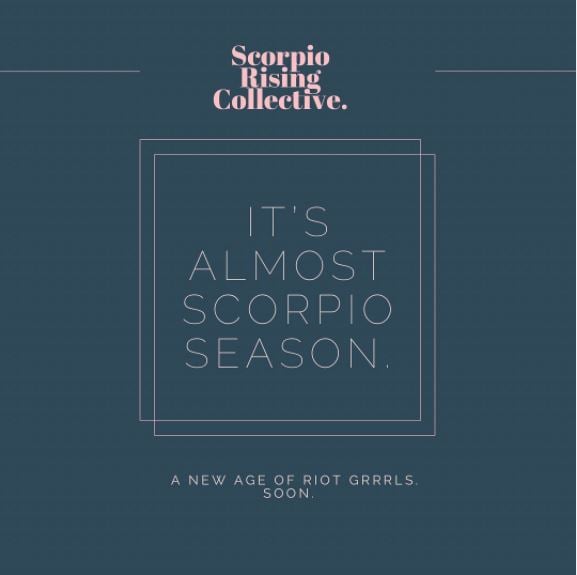 Third-year Music Production & Sound Engineering student Megan Archdale-Evans wants to improve the music industry for women with her burgeoning label Scorpio Rising Collective. Classically trained from a young age, Megan fell in love with the studio at college and immediately knew she wanted to be a label owner. That vision is now bearing fruit and is doing so in a way that aims to provide accessibility and a safe space for women in music.

What Megan Says: “October of last year, I launched Scorpio Rising. I've signed an artist and I've just finished recording the first release…It's a record label ‘by womxn, for womxn’ in music…I'd wanted to do it in a sort of abstract way for a really long time and then over the past year or so, I really started looking into and reading and realising this disparity in gender equality in music. I've realised how affected I've been by it, even if I hadn't quite realised that before. It's really a response to that, I think…There's a lot of research that shows that people respond really positively to being taught by accessible role models. They need accessible role models, and I've never really had that…There's very little that teaches women recording and mixing and I really want to be able to use it for that because I've never had a woman teach me those things. And I really would like to be that for someone else.” 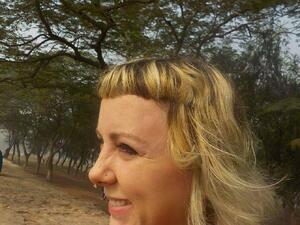 For International Women’s Day, Sound For Film & Television student Heather Hughes was invited to contribute to Global Juno: Women in Dance and Urban MBA’s London exhibition 'Break the Bias: Lady or Legend’. Her installation, 'Bravery in What is Soft', explores the connection between femininity and the Earth; examining what it means to be a woman through the lens of natural creation and the lunar rhythms that govern our world.

What Heather Says: “The exhibition is run by Global Juno: Women in Dance and Urban MBA…Urban MBA fund startup projects in London. Their idea for the exhibition was that they wanted an open door event where women, or anyone who identifies as a woman, were invited to go on a sensory journey. They had sound and visuals, an aromatherapy section, and a movement section. They wanted to use that as an opportunity to build a network of women in the creative industries…The brief that Giedrė, who organised it, gave me was to Break The Bias; don't be a lady be a legend. She said she wanted it to be a journey and wanted it to evoke a really sensory response from the audience… I started off making a few bits of animation. I had images of influential women throughout history. Lots of flowers and stuff. And then I thought actually, “No, that is the bias, isn't it?” So I had to really think of what it means to be a woman on a much deeper level…In essence, women have a more emotional view of the world than men. We're connected to the moon and the tides and we are creators; we create babies. I think there is a really profound connection between being a woman and between nature, so I started to work from that angle.”

Before Christianity, women were worshipped as goddess-like creators.
To be a woman is to have a profound connection with the earth and with the very core of existence itself.
It is no secret that life does not come without suffering. We are born into the world crying and the mother must experience great pain before she can hold her child with soft, tender, earthly love.
However, western society is often quick to mistake softness as weakness, when in fact there is nothing braver than softness, vulnerability and a connection to one's true emotions.
To be feminine is to be soft like fire.
Bravery in what is soft takes the listener on a journey through what it means to be female.
Beginning in the womb, the divine sanctuary where all life once existed within a feminine space.
Taking the audience to the moon and back again.
You will hear the sound of the tides crashing against the waters of the womb, as wolves howl longingly up at the moon.
The bassy roar of thunder begins to eat you whole.
The Ngombi harp plays in the distance and the women of the Bwiti tribe can be heard singing, as they perform a sacred ceremony to heal an ill female member of their tribe.
The melodies cross paths with a ritualistic hand-clapping game performed by young girls across the western world, patterning friendship, thus inciting the queendom.
Power is so tightly bound to vulnerability and mother earth is constantly faced with the unlikely paradox that the moon must wane, the tides must crash and flowers must bloom.
These bold acts of nature are by far the most beautifully brave challenges of physics.
A gentle juxtaposition in which softness is in fact bravery.
FIND OUT MORE:

Investigating the underrepresentation of women in game audio with Sabrina Fletcher

“dBs has given me the tools I need to thrive”: dBs Bristol’s Rob Kivits on studying Sound for Film & Television

Louder than words: How Natalia Mamcarczyk is turning sound into a tool for empowerment

In a few weeks' time, Natalia Mamcarczyk will be embarking on an ambitious 630 mile sound walk for Women's Aid. We joined her ...
Start Reading